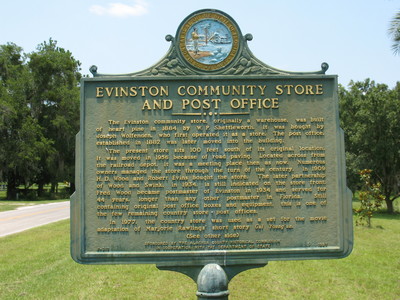 The Evinston Community Store and Post Office (also known as the Fred Wood Store or Wood & Swink) is a historic site in Evinston, Florida, United States. On May 5, 1989, it was added to the U.S. National Register of Historic Places.

This marker is placed outside the store. The text reads as :

" The Evinston community store, originally a warehouse, was built of heart pine in 1884 by W.P. Shettleworth. it was bought by Joseph Wolfenden, who first operated it as a store. The post office, established in 1882 was later moved into the building. The present store sits 100 feet south of its original location. It was moved in 1956 because of road paving. Located across from the railroad depot, it was a meeting place then as now. Numerous owners managed the store through the turn of the century. In 1909 H.D. Wood and Robert Evins bought the store. The later partnership of Wood and Swink, in 1934, is still indicated on the store front. Fred Wood became postmaster of Evinston in 1934 and served for 44 years, longer than any other postmaster in Florida. Still containing original post office boxes and equipment, this is one of the few remaining country store-post offices. In 1977, the country store was used as a set for the movie adaptation of Marjorie Rawlings' short story Gal Young'un."

Sponsored by the Alachua County Historical Commission in cooperation with the Department of State.