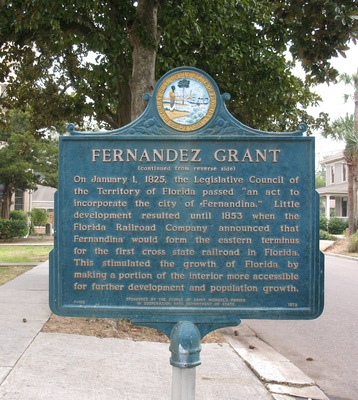 This marker is located in front of Saint Michael's Catholic Church on N. 4th Street., in Nassua County, Fl.

" During the Spanish and English periods of Florida history, many large tracts of land were granted primarily to induce settlement. All that remains of the Don Domingo Fernandez Spanish Grant is the family cemetery and this park. Royal title to this property was granted August 9, 1807. This land was once a part of the Earl of Egmont property on Amelia Island, which included the present site of the City of Fernandina Beach. On January 1, 1825, the Legislative Council of the Territory of Florida passed "an act to incorporate the city of Fernandina." Little development resulted until 1853 when the Florida Railroad Company announced that Fernandina would form the eastern terminus for the first cross state railroad in Florida. This stimulated the growth of Florida by making a portion of the interior more accessible for further development and population growth. "