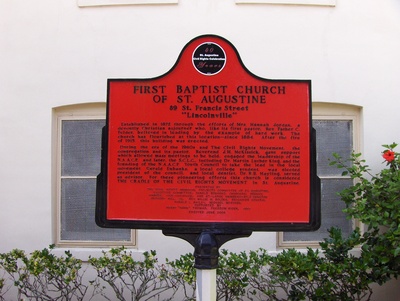 The First Baptist Church of St. Augustine in the Lincolnville Historic District in St. Augustine, Florida, USA., was established in 1872.

" Established in 1872 through the efforts of Mrs. Hannah Jordan, a devoutly Christian sojourner who, like its first pastor, Rev. Father C. Felder, believed in leading by the example of hard work. The church has flourished at this location -- since 1884. After the fire of 1915, this building was erected. During the era of the 1960s and The Civil Rights Movement, the congregation and its pastor, Reverend J.H. McKissick, gave support which allowed mass meetings to be held, engaged the leadership of the N.A.A.C.P. and later the S.C.L.C, including Dr. Martin Luther King, and the founding of the N.A.A.C.P. Youth Council to take the lead in the local movement. Gerald Eubanks, a local college student, was elected president of the council, and local dentist, Dr. B.B. Hayling, served as advisor. For these pioneering efforts this church is considered THE CRADLE OF THE CIVIL RIGHTS MOVEMENT in St. Augustine."