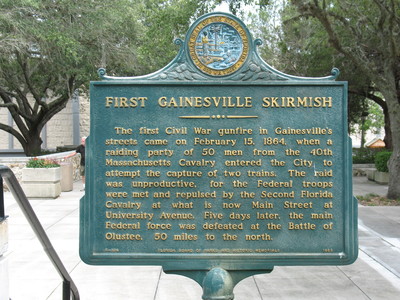 This marker is located between the 1st St. NE and 3rd St NE at Municipal Building.

" The first Civil War gunfire in Gainesville´s streets came on February 15, 1864, when a raiding party of 50 men from the 40th Massachusetts Cavalry entered the City to attempt the capture of two trains. The raid was unproductive, for the Federal troops were met and repulsed by the Second Florida Cavalry at what is now Main Street at University Avenue. Five days later, the main Federal force was defeated at the battle of Olustee, 50 miles to the north. "

Sponsors: Florida Board of Parks and Historic Memorials 1969