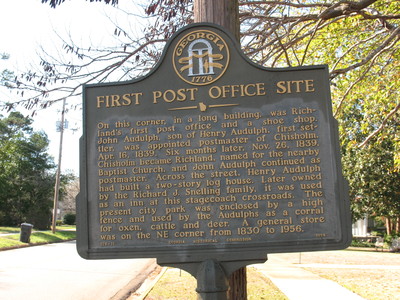 This marker is located two blocks north of US 280 at the western edge of the main street. On the corner is a long building which was the first post office and shoe shop in Richland.

" On this corner, in a long building, was Richland’s first post office and a shoe shop. John Audulph, son of Henry Audulph, first settler, was appointed postmaster of Chisholm, Apr. 16, 1839. Six months later, Nov. 26, 1839, Chisholm became Richland, named for the nearby Baptist Church, and John Audulph continued as postmaster. Across the street, Henry Audulph had built a two-story log house. Later owned by the Richard J. Snelling family, it was used as an inn at this stagecoach crossroads. The present city park was enclosed by a high fence and used by the Audulphs as a corral for oxen, cattle and deer. A general store was on the NE corner from 1830 to 1956."