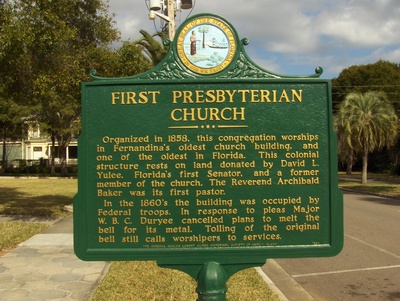 This marker is in Fernandina Beach in Nassua County, on the N 6th Street near Alachua Street. It was erected in 1964 by the General Duncan Lamont Clinch Historical Society of Amelia Island.

" Organized in 1858, this congregation worships in Fernandina's oldest church building, and one of the oldest in Florida. This colonial structure rests on land donated by David L. Yulee, Florida's first Senator, and a former member of the church. The Reverend Archibald Baker was its first pastor. In the 1860,s the building was occupied by Federal troops, in response to pleas Major W.B.C. Duryee cancelled plans to melt the bell for its metal. Tolling of the original bell still calls worshipers to services."