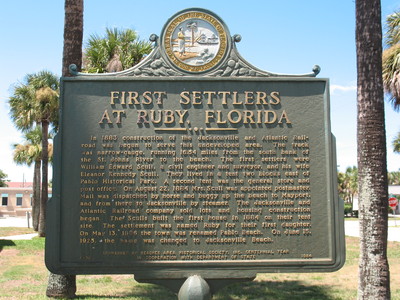 This marker was sponsored by the Beaches Area Historical Society, Inc. Centennial Year in cooperation with Department of State. It is located on Beach Blvd. near N 5th St.

" In 1883 construction of the Jacksonville and Atlantic Railroad was begun to serve this undeveloped area. The track was narrow-gauge, running 16.54 miles from the south bank of the St. Johns River to the beach. The first settlers were William Edward Scull, a civil engineer and surveyor, and his wife Eleanor Kennedy Scull. They lived in a tent two blocks east of Pablo Historical Park. A second tent was the general store and post office. On August 22, 1884 Mrs. Scull was appointed postmaster. mail was dispatched by horse and buggy up the beach to Mayport, and from there to Jacksonville by steamer. The Jacksonville and Atlantic Railroad company sold lots and housing construction began. The Sculls built the first house in 1884 on their tent site. The settlement was named ruby for their first daughter. On May 13, 1886 the town was renamed Pablo Beach. On June 15, 1925, the name was changed to Jacksonville Beach."