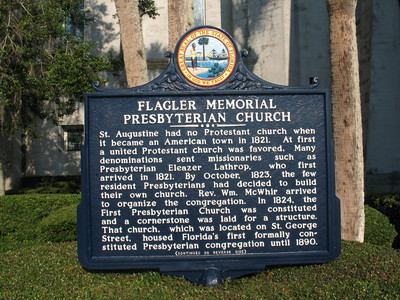 The marker (Obverse) reads as :

" St. Augustine had no Protestant church when it became an American town in 1821. At first a united Protestant church was favored. Many denominations sent missionaries such as Presbyterian Eleazer Lathrop, who first arrived in 1821. By October, 1823, the few resident Presbyterians had decided to build their own church. Rev. Wm. McWhir arrived to organize the congregation. In 1824, the First Presbyterian Church was constituted and a cornerstone was laid for a structure. That church, which was located on St. George Street, housed Florida's first formally constituted Presbyterian congregation until 1890."