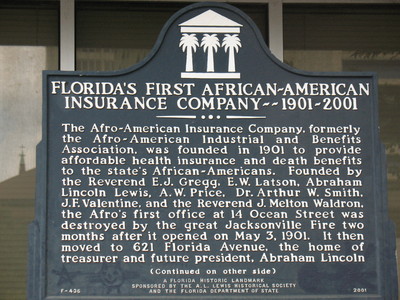 The site of Florida's First African-American Insurance Company, as well as the historical marker about it, is located on Union Street at the intersection with Ocean Street in Jacksonville, Florida.

"The Afro-American Insurance Company, formerly the Afro-American Industrial and Benefits Association, was founded in 1901 to provide affordable health insurance and death benefits to the state's African-Americans. Founded by the Reverend E.J. Gregg, E.W. Latson, Abraham Lincoln Lewis, A.W. Price, Dr. Arthur W. Smith, J.F. Valentine, and the Reverend J. Melton Waldron, the Afro's first office at 14 Ocean Street was destroyed by the great Jacksonville Fire two months after it opened on May 3, 1901. It then moved to 621 Florida Avenue, the home of treasurer and future president, Abraham Lincoln Lewis (1865-1947). From their next home office at 105 E. Union Street, the company wrote millions of dollars of insurance policies and started district offices in Georgia, Alabama, Louisiana and Texas. Lewis formed the African-American Pension Bureau and in 1935, land was purchased on Amelia Island for the black resort called American Beach. On April 22, 1956, the company dedicated its new, million-dollar building at Ocean and Union Street. After over 80 years of serving black southerners, the company closed on July 17, 1987. The 11th Episcopal District of the African Methodist Episcopal Church owns the Building."