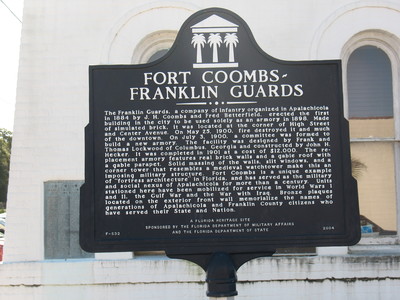 This marker is located on the 4th St, Apalachicola, Florida. Franklin Guards, a company of Infantry organized in Apalachicola in 1884 by J.H. Coombs.

" The Franklin Guards, a company of Infantry organized in Apalachicola in 1884 by J.H. Coombs and Fred Betterfield, erected the first building in the city to be used solely as an armory in 1898. Made of simulated brick, it was located at the corner of High Street and Center Avenue. On May 25, 1900, fire destroyed it and much of the downtown. On July 3, 1900, a committee was formed to build a new armory. The facility was designed by Frank and Thomas Lockwood of Columbus, Georgia and constructed by John H. Hecker. It was completed in 1901 at a cost of $12,000. The replacement armory features real brick walls and a gable roof with a gable parapet. Solid massing of the walls, slit windows, and a corner tower that resembles a medieval watchtower make this an imposing military structure. Fort Coombs is a unique example of “fortress architecture” in Florida, and has served as the military and social nexus of Apalachicola for more than a century. Units stationed here have been mobilized for service in World Wars I and II, the Gulf War and the War with Iraq. Bronze plaques located on the exterior front wall memorialize the names of generations of Apalachicola and Franklin County citizens who have served their State and Nation."