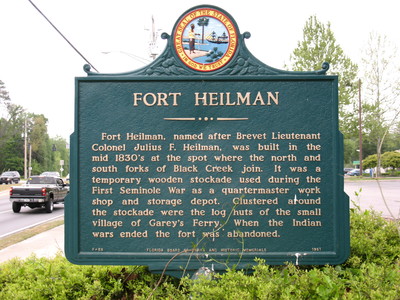 This is located in front of a shopping center on S.R. 21. in Middleburg, Florida. This fort was built in the mid 1830's , and used during the Seminole Wars, but later abandoned after the Indian wars ended.

" Fort Heilman, named after Brevet Lieutenant Colonel Julius F. Heilman, was built in the mid 1830's at the spot where the north and south forks of Black Creek join. It was a temporary wooden stockade used during the First Seminole War as a quartermaster work shop and storage depot. Clustered around the stockade were the log huts of the small village of Garey's Ferry. When the Indian wars ended the fort was abandoned."

It was placed by the Florida Board of Parks and Historic Memorials in 1961.