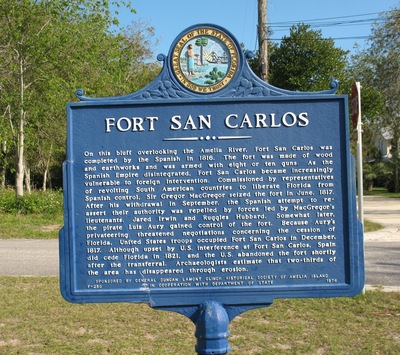 It is located on the corner of Estrada and White St. in Nassau County, Florida.

" On this bluff overlooking the Amelia River, Fort San Carlos was completed by the Spanish in 1816. The fort was made of wood and earthworks and was armed with eight or ten guns. As the Spanish Empire disintegrated, Fort San Carlos became increasingly vulnerable to foreign intervention. Commissioned by representatives of revolting South American countries to liberate Florida from Spanish control, Sir Gregor MacGregor seized the fort in June, 1817. After his withdrawal in September, the Spanish attempt to reassert their authority was repelled by forces led by MacGregor's lieutenants, Jared Irwin and Ruggles Hubbard. Somewhat later, the pirate Luis Aury gained control of the fort. Because Aury's privateering threatened negotiations concerning the cession of Florida, United States troops occupied Fort San Carlos in December, 1817. Although upset by U.S. interference at Fort San Carlos, Spain did cede Florida in 1821, and the U.S. abandoned the fort shortly after the transferral. Archaeologists estimate that two-thirds of the area has disappeared through erosion."