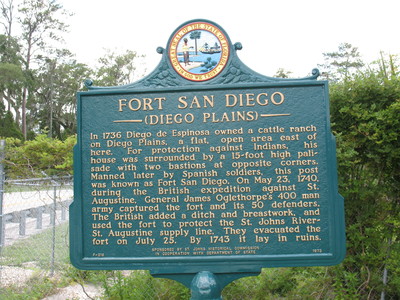 " In 1736 Diego de Espinosa owned a cattle ranch on Diego Plains, a flat, open area east of here. For protection against Indians, his house was surrounded by a 15-foot high palisade with two bastions at opposite corners. Manned later by Spanish soldiers, this post was known at Fort San Diego. On May 23, 1740, during the British expedition against St. Augustine, General James Oglethorpe´s 400 man army captured the fort and its 50 defenders. The British added a ditch and breastwork, and used the fort to protect the St. Johns River-St. Augustine supply line. They evacuated the fort on July 25. By 1743 it lay in ruins."

Sponsored by St. Johns Historical Commission in cooperation with Department of State