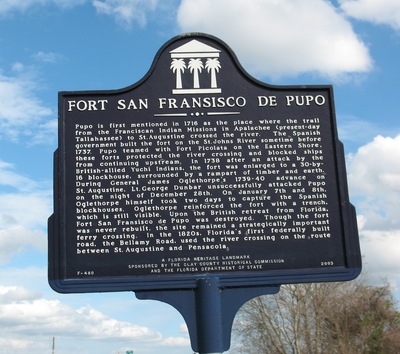 This marker is located just west of the St Johns River, in Clay County, Florida. It was placed by the Clay County Historical Commission.

" Pupo is first mentioned in 1716 as the place where the trail from the Franciscan Indian missions and the Apalachee (present-day Tallahassee)to St. Augustine crossed the river. The Spanish Government built the fort on the St. Johns River some time before 1737. Pupo teamed with Fort Picolata on the Eastern shore. These forest protected the river crossing and blocked ships from continuing up stream. In 1738 after an attack by the British-allied Yuchi Indians, the fort was enlarged to a 30-by-16 blockhouse, surrounded by a rampart of timber and earth. During General James Oglethorpe's 1739-40 advance on St. Augustine, Lt George Dunbar unsuccessfully attacked Pupo on the night of December 28th. On January 7th and 8th, Oglethorpe himself to two days to capture the Spanish blockhouses. Oglethorpe reinforced the fort within a trench, which is still visible. Upon the British retreat from Florida, Fort San Francisco de Pupo was destroyed. Though the Fort was never rebuilt, the site remained a strategically important ferry crossing. In the 1820's Florida's first Federally built road, the Bellamy Road, used the river crossing on the route between St. Augustine and Pensacola."