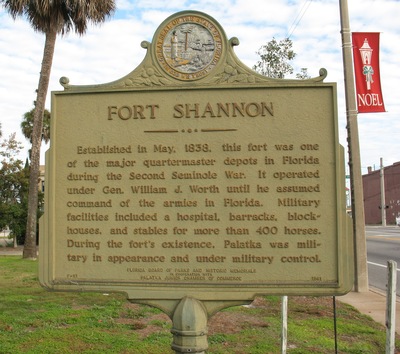 This marker is located in Palatka, Florida Ft Shannon was a key security point along the St Johns River during the Seminole Indian Wars. This fort was named after Captain Samuel Shannon.

" Established in May, 1838, this fort was one of the major quartermaster depots in Florida during the Second Seminole War. It operated under Gen. William J. Worth until he assumed command of the armies in Florida. Military facilities included a hospital, barracks, blockhouses, and stables for more than 400 horses. During the fort's existence, Palatka was military in appearance and under military control."