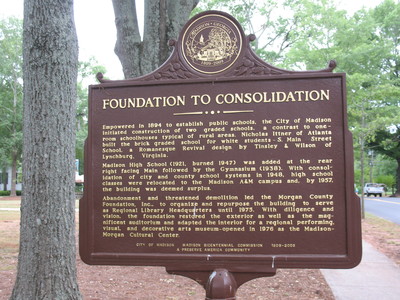 This marker is located at the Madison Morgan Cultural Center, on S Main St, Madison, Georgia. This was erected 2011 by City of Madison, Madison Bicentennial Commission 1809-2009.

Madison High School (1921, burned 1947) was added at the rear right facing Main followed by the Gymnasium (1938). With consolidation of city and county school systems in 1948, high school classes were relocated to the Madison A&M campus and, by 1957, the building was deemed surplus.

Abandonment and threatened demolition led the Morgan County Foundation, Inc., to organize and repurpose the building to serve as Regional Library Headquarters until 1975. With diligence and vision, the foundation restored the exterior as well as the magnificent auditorium and adapted the interior for a regional performing, visual, and decorative arts museum-opened in 1976 as the Madison-Morgan Cultural Center."