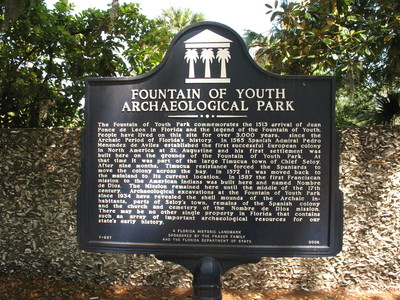 This is one of two historical markers with the same text located at the Fountain of Youth Archaeological Park in St. Augustine, Florida. One is at the entrance and one inside the park.

" The Fountain of Youth Park commemorates the 1513 arrival of Juan Ponce de Leon in Florida and the legend of the Fountain of Youth. People have lived on this site for over 3000 years, since the Archaic Period of Florida’s history. In 1565 Spanish Admiral Pedro Menendez de Aviles established the first successful European colony in America at St. Augustine and his first settlement was built here on the grounds of the Fountain of Youth Park. At that time it was part of the large Timucua town of Chief Seloy. Within nine months Timucua resistance forced the Spaniards to move the colony across the bay. In 1572 it was moved back to the mainland to its present downtown location. In 1587 the first Franciscan mission to the American Indians was built here and named Nombre de Dios. The Mission remained here until the middle of the 17th century. Archaeological excavations at the Fountain of Youth Park since 1934 have revealed the shell mounds of the Archaic inhabitants, parts of Seloy’s town, remains of the Spanish colony and the church and cemetery of the Nombre de Dios mission. There is probably no other single property in Florida that contains such an array of important archaeological resources for our state’s early history."