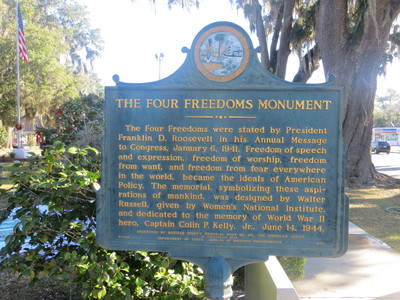 This marker is located in the Four Freedoms Park, in Madison, Florida.

" The Four Freedoms were stated by President Franklin D. Roosevelt in his Annual Message to Congress, January 6, 1941. Freedom of speech and expression, freedom of worship, freedom from want, and freedom from fear everywhere in the world, became the ideals of American policy. The memorial, symbolizing these aspirations of mankind, was designed by Walter Russell, given by Women's National Institute, and dedicated to the memory of World War II hero, Captain Colin P. Kelly, Jr., June 14, 1944."

Sponsored by the Madison County Memorial Post No. 68, The American Legion in Cooperation with Department of State, Bureau of Historic Preservation