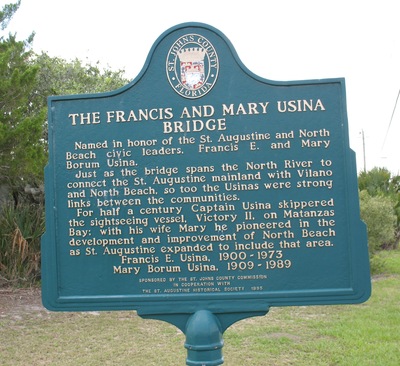 This bridge was named in honor of civic leaders from St Augustine and North Beach, Francis E. and Mary Borum Usina.

" Named in honor of the St. Augustine and North Beach civic leaders, Francis E. and Mary Borum Usina. Just as the bridge spans the North River to connect the St. Augustine mainland with Vilano and North Beach, so too the Usinas were strong links between the communities. For half a century Captain Usina skippered the sightseeing vessel, Victory II, on Matanzas Bay: with his wife Mary he pioneered in the development and improvement of North Beach as St. Augustine expanded to include that area."

Sponsored or placed by: ST. JOHNS COUNTY COMMISSION IN COOPERATION WITH THE ST. AUGUSTINE HISTORICAL SOCIETY.