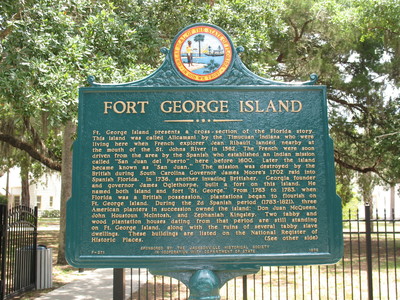 This historical marker is located just outside the entrance gates to the Fort George Island Cultural Center within the historic Ribault Club.

" The Ft. George Island presents a cross-section of the Florida story. This Island was called Alicamani by the Timucuan Indians who were living here when French explorer Jean Ribault landed nearby at the mouth of the St. John's river in 1562. The French were soon driven from the area by the Spanish who established an Indian mission called "San Juan del Puerto" here before 1600. Later the island became known as "San Juan". The mission was destroyed by the British during South Carolina Governor James Moore's 1702 raid into Spanish Florida. In 1736, another invading Britisher. Georgia founder and Governor James Oglethorpe, built a fort on this island. He named both island and fort "St. George". From 1763 to 1783, when Florida was a British possession, plantations began to flourish on Ft. George Island. During the 2d Spanish period (1783-1821), three American planters in secession owned the island: Don Juan McQueen, John Houston McIntosh, and Zephaniah Kingsley. Two tabby and wood plantation houses dating from that period are still standing on Ft. George Island, along with the ruins of several tabby slave dwellings. These buildings are listed on the National Register of Historic Places."

It was placed by The Jacksonville Historical Society with the Department of State.