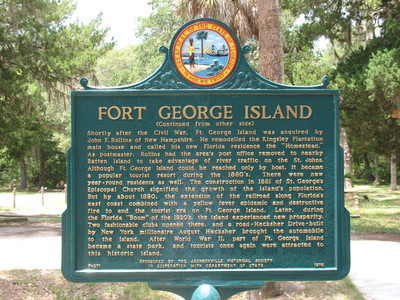 This historical marker is located just outside the entrance gates to the Fort George Island Cultural Center within the historic Ribault Club.

The marker reads (Reverse) as : Continued --

" Shortly after the Civil War, Ft. George Island was acquired by John F. Rollins of New Hampshire. He remodeled the Kingsley Plantation main house and called his new Florida residence the "Homestead". As postmaster, Rollins had the area's post office removed to nearby Batten Island to take advantage of the river traffic on the St. John's. Although Ft. George Island could be reached only by boat, it became a popular tourist resort during the 1880's. There were new year-round residents as well. The construction in 1881 of St. George's Episcopal Church signified the growth of the islands population. But by about 1890, the extension of the railroad along Florida's east coast combined with a yellow fever epidemic and destructive fire to end the tourist era on St. George Island. Later, during the Florida "Boom" of the 1920's, the island experienced new prosperity. Two fashionable clubs opened there and a road -Hecksher Drive- built by New York millionaire August Hecksher brought the automobile to the island. After World War II part of Ft. George Island became a state park, and tourists once again were attracted to this historic island. "

It was placed by The Jacksonville Historical Society with the Department of State.