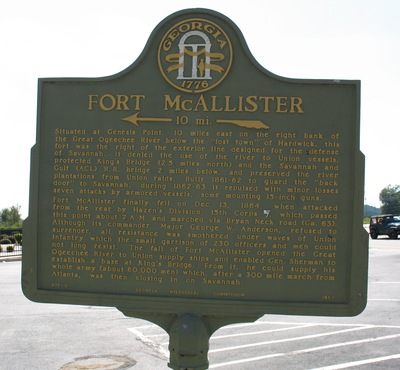 This marker is situated at Genesis Point, 10 miles east on the right bank of the Ogeechee River.

" Situated at Genesis Point, 10 miles east on the right bank of the Great Ogeechee River below the "lost town" of Hardwick, this fort was the right of the exterior line designed for the defense of Savannah. It denied the use of the river to Union vessels, protected King's Bridge (2.5 miles north) and the Savannah and Gulf (ACL) R.R. bridge 2 miles below, and preserved the river plantations from Union raids. Built 1861-62 to guard the "back door" to Savannah, during 1862-63 it repulsed with minor losses seven attacks by armored vessels, some mounting 15-inch guns. Fort McAllister finally fell on Dec. 13, 1864, when attacked from the rear by Hazen's Division, 15th Corps (USA), which passed this point about 7 A.M. and marched via Bryan Neck road (Ga. 63). Although its commander, Major George W. Anderson, refused to surrender, all resistance was smothered under waves of Union infantry which the small garrison of 230 officers and men could not long resist. The fall of Fort McAllister opened the Great Ogeechee River to Union supply ships and enabled Gen. Sherman to establish a base at King's Bridge. From it, he could supply his whole army (about 60,000 men) which, after a 300 mile march from Atlanta, was then closing in on Savannah. "