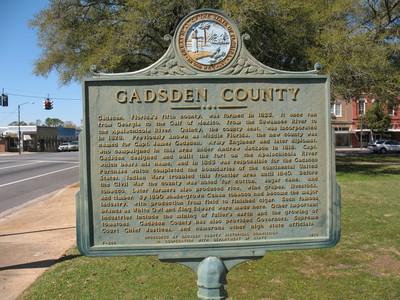 This marker is located on Jefferson Street, on the lawn of the County Courthouse, in Gadsden County, Florida.

" Gadsden, Florida's fifth county, was formed in 1823. It once ran from Georgia to the Gulf of Mexico, from the Suwannee River to the Apalachicola River. Quincy, the county seat, was incorporated in 1828. Previously known as Middle Florida, the new county was named for Capt. James Gadsden, Army Engineer and later diplomat, who campaigned in this area under Andrew Jackson in 1818. Capt. Gadsden designed and built the fort on the Apalachicola River which bears his name, and in 1853 was responsible for the Gadsden Purchase which completed the boundaries of the continental United States. Indian Wars troubled this frontier area until 1840. Before the Civil War the county was noted for cotton, sugar cane, and tobacco. Later farmers also produced rice, wine grapes, livestock, and timber. By 1890 shade-grown Cuban tobacco had become the major industry, with production from field to finished cigar. Such famous brands as White Owl and King Edward were made here. Other important industries include the mining of fuller's earth and the growing to tomatoes. Gadsden County has also provided Governors, Supreme Court Chief Justices, and numerous other high state officials. "

Sponsored by Gadsden County Historical Commission in cooperation with Department of State.