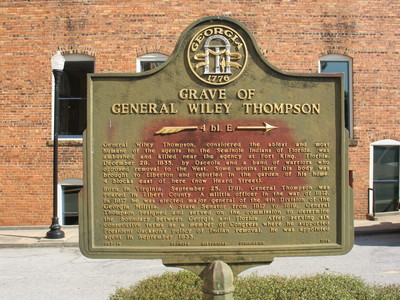 This marker is located outside the Elbert County Courthouse in Elberton, Georgia.

" General Wiley Thompson, considered the ablest and most humane of the agents to the Seminole Indians of Florida, was ambushed and killed near the agency at Fort King, Florida, December 28, 1835, by Osceola and a band of warriors who opposed removal to the West. Some months later his body was brought to Elbert and reburied in the garden of his home, 4 blocks east of here (now Heard Street).

Born in Virginia, September 25, 1781, General Thompson was reared in Elbert County. A militia officer in the war of 1812, in 1817 he was elected major general of the 4th Division of the Georgia Militia. A State Senator from 1817 to 1819, General Thompson resigned and served on the commission to determine the boundary between Georgia and Florida. After serving six consecutive terms as a member of Congress where he supported President Jackson’s policy of Indian removal, he was appointed agent in September 1833."