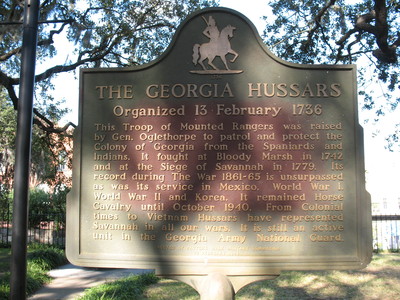 This marker is for the Georgia Hussars, which is still an active unit in the Georgia Army National Guard.

" Organized 13 February 1736 This Troop of Mounted Rangers was raised by Gen. Oglethorpe to patrol and protect the Colony of Georgia from the Spaniards and Indians. It fought at Bloody Marsh in 1742 and at the Siege of Savannah in 1779. Its record during The War 1861-65 is unsurpassed as was its service in Mexico, World War I, World War II and Korea. It remained Horse Cavalry until October 1940. From Colonial times to Vietnam Hussars have represented Savannah in all our wars. It is still an active unit in the Georgia Army National Guard."