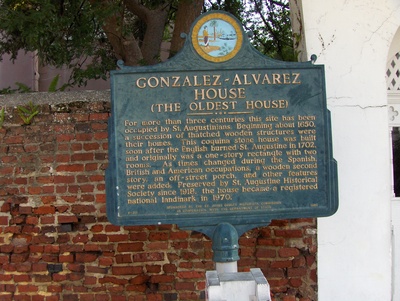 This marker is outside the Gonzalez -Alvarez House, which is one of the oldest house in St Augustine and the state of Florida. This was built between 1702-1727. National Register of Historic Places #70000845

" For more than three centuries this site has been occupied by St. Augustinians. Beginning about 1650, a succession of thatched wooden structures were their homes. This coquina stone house was built soon after the English burned St. Augustine in 1702, and originally was a one-story rectangle with two rooms. As times changed during the Spanish, British and American occupations, a wooden second story, an off-street porch, and other features were added. Preserved by St. Augustine Historical Society since 1918, the house became a registered national landmark in 1970."

Sponsored by the St. Johns County Historical Commission in cooperation with the Department of State.