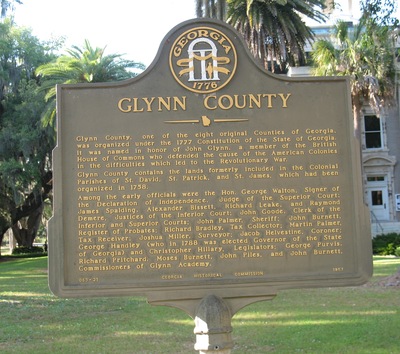 Glynn County Marker, Brunswick, GA. This marker is located on the Courthouse lawn in Brunswick, Georgia.

" Glynn County, one of the eight original Counties of Georgia, was organized under the 1777 Constitution of the State of Georgia. It was named in honor of John Glynn, a member of the British House of Commons who defended the cause of the American Colonies in the difficulties which led to the Revolutionary War. Glynn County contains the lands formerly included in the Colonial Parishes of St. David, St. Patrick, and St. James, which had been organized in 1758.