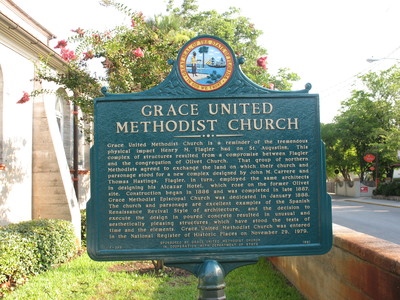 The Grace United Methodist Church is a historic church which Henry Flagler had constructed in St. Augustine, Florida. It is located at 8 Carrera Street. Built within a one year span (from 1886 to 1887), it was added to the U.S. National Register of Historic Places on November 29, 1979.

" Grace United Methodist Church is a reminder of the tremendous physical impact Henry M. Flagler had on St. Augustine. This complex of structures resulted from a compromise between Flagler and the congregation of Olivet Church. That group of northern Methodists agreed to exchange the land on which their church and parsonage stood for a new complex designed by John M. Carrere and Thomas Hastings. Flagler, in turn, employed the same architects in designing his Alcazar Hotel, which rose on the former Olivet site. Construction began in 1886 and was dedicated in January 1888. The church and parsonage are excellent examples of the Spanish Renaissance Revival Style of architecture, and the decision to execute the design in poured concrete resulted in unusual and aesthetically pleasing structures which have stood the tests of time and the elements. Grace United Methodist Church was entered in the National Register of Historic Places on November 29, 1979."