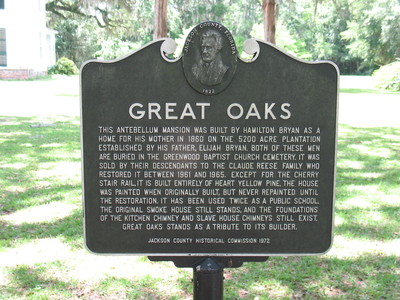 The beautiful old Bryan home , long known as "Great Oaks ", was built in 1860. This Greek Revival mansion has been restored in the 1960's by the Claude Reese family. It is not open to public but can be viewed from the State Highway 71, where the marker details its story.

" This antebellum mansion was built by Hamilton Bryan as a home for his mother in 1860 on the 5200 acre plantation established by his father, Elijah Bryan. Both of these men are buried in the Greenwood Baptist Church Cemetery. It was sold by their descendants to the Claude Reese family who restored it between 1961 and 1965. Except for the cherry stair rail, it is built entirely of heart yellow pine. The house was painted when originally built, but never repainted until the restoration. It has been used twice as a public school. The original smoke house still stands, and the foundations of the kitchen chimney and slave house chimneys still exist. Great Oaks stands as a tribute to its builder. "