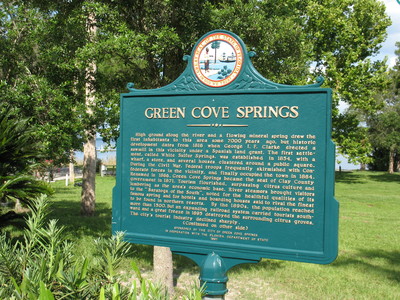 This marker is located on Walnut Street at Spring Park, in Green Cove Springs in Clay County, Florida.

" High ground along the river and a flowing mineral spring drew the first inhabitants to this area some 7000 years ago, but historic development dates from 1816 when George I. F. Clarke erected a sawmill in this vicinity under a Spanish land grant. The first settlement, called White Sulfur Springs, was established in 1854, with a wharf, a store, and several houses clustered around a public square. During the Civil War, Federal troops frequently skirmished with Confederate forces in the vicinity, and finally occupied the town in 1864. Renamed in 1866, Green Cove Springs became the seat of Clay County government in 1871. Tourism flourished, surpassing citrus culture and lumbering as the area's economic base. River steamers brought visitors to the "Saratoga of the South", noted for the healthful qualities of its famous spring and for hotels and boarding houses said to rival the finest to be found in northern resorts. By the 1890s, the population reached more than 1500. But an expanding railroad system carried tourists southward and a great freeze in 1895 destroyed the surrounding citrus groves. The city's tourist industry declined sharply."

Sponsors: The City of Green Cove Springs in Cooperation with the Florida Department of State