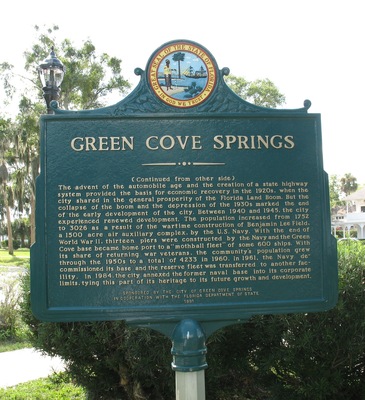 This marker is located on Walnut Street at Spring Park, in Green Cove Springs in Clay County, Florida.

The text on the marker reads as : (Side 2) continued from other side :

" -- The advent of the automobile age and the creation of a state highway system provided the basis for economic recovery in the 1920s, when the city shared in the general prosperity of the Florida Land Boom. But the collapse of the boom and the depression of the 1930s marked the end of the early development of the city. Between 1940 and 1945, the city experienced renewed development. The population increased from 1752 to 3026 as a result of the wartime construction of Benjamin Lee Field, a 1500 acre air auxiliary complex, by the U. S. Navy. With the end of World War II, thirteen piers were constructed by the Navy and the Green Cove base became home port to a "mothball fleet" of some 600 ships. With its share of returning war veterans, the community's population grew through the 1950s to a total of 4233 in 1960. In 1961, the Navy decommissioned its base and the reserve fleet was transferred to another facility. In 1984, the city annexed the former naval base into its corporate limits, tying this part of its heritage to its future growth and development.

Sponsors: The City of Green Cove Springs in Cooperation with the Florida Department of State