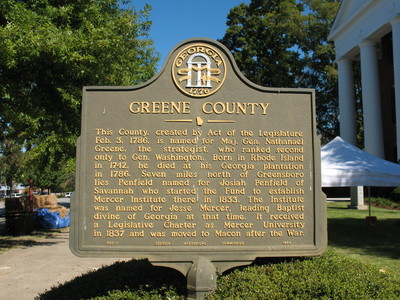 This marker is located outside the courthouse in Greensboro, in Greene County, Georgia.

" This County, created by Act of the Legislature Feb. 3, 1786, is named for Maj. Gen. Nathanael Greene, the strategist who ranked second only to Gen. Washington. Born in Rhode Island in 1742, he died at his Georgia plantation in 1786. Seven miles north of Greensboro lies Penfield named for Josiah Penfield of Savannah who started the Fund to establish Mercer Institute there in 1833. The Institute was named for Jesse Mercer, leading Baptist divine of Georgia at that time. It received a Legislative Charter as Mercer University in 1837 and was moved to Macon after the War."

Erected by the Georgia Historical Commission, 1954.