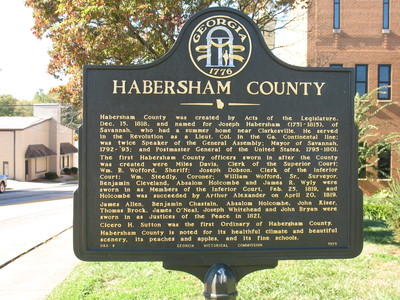 This marker is located adjacent to the Habersham County Courthouse in Clarkesville.

" Habersham County was created by Acts of the Legislature, Dec. 15, 1818, and named for Joseph Habersham (1751-1815), of Savannah, who had a summer home near Clarkesville. He served in the Revolution as a Lieut. Col. in the Ga. Continental Line; was twice Speaker of the General Assembly; Mayor of Savannah, 1792-'93; and Postmaster General of the United States, 1795-1801. The first Habersham County officers sworn in after the County was created were Miles Davis, Clerk of the Superior Court; Wm. B. Wofford, Sheriff; Joseph Dobson, Clerk of the Inferior Court; Wm. Steedly, Coroner; William Wofford, Sr., Surveyor. Benjamin Cleveland, Absalom Holcombe and James R. Wyly were sworn in as Members of the Inferior Court, Feb. 25, 1819, and Holcombe was succeeded by Arthur Alexander on April 20, 1819. James Allen, Benjamin Chastain, Absalom Holcombe, John Kiser, Thomas Brock, James O'Neal, Joseph Whitehead and John Bryan were sworn in as Justices of the Peace in 1821. Cicero H. Sutton was the first Ordinary of Habersham County. Habersham County is noted for its healthful climate and beautiful scenery, its peaches and apples, and its fine schools."