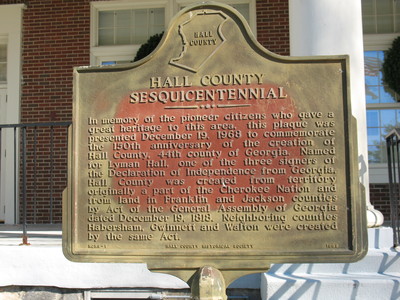 This marker is in Gainesville, Georgia, in Hall County. It is located at the front entrance to the Gainesville Civic Center. It was erected to mark the 150th anniversary of the creation of Hall County, in Georgia.

" In memory of the pioneer citizens who gave a great heritage to this area, this plaque was presented December 19, 1968 to commemorate the 150th anniversary of the creation of Hall County, 44th county of Georgia. Named for Lyman Hall, one of the three signers of the Declaration of Independence from Georgia, Hall County was created from territory originally a part of the Cherokee nation and from land in Franklin and Jackson Counties by Act of the General Assembly of Georgia dated December 19, 1818. Neighboring counties Habersham, Gwinnett and Walton were created by the same Act."