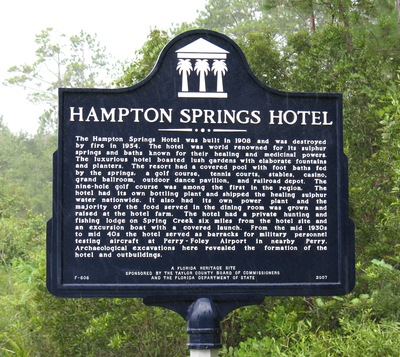 This marker is located off CR 356, Perry Florida.

" The Hampton Springs Hotel was built in 1908 and was destroyed by fire in 1954. The hotel was world renowned for its sulphur springs and baths known for their healing and medicinal powers. The luxurious hotel boasted lush gardens with elaborate fountains and planters. The resort had a covered pool with foot baths fed by the springs, a golf course, tennis courts, stables, casino, grand ballroom, outdoor dance pavilion, and railroad depot. The nine-hole golf course was among the first in the region. The hotel had its own bottling plant and shipped the healing sulphur water nationwide. It also had its own power plant and the majority of the food served in the dining room was grown and raised at the hotel farm. The hotel had a private hunting and fishing lodge on Spring Creek six miles from the hotel site and an excursion boat with a covered launch. From the mid 1930s to mid 40s the hotel served as barracks for military personnel testing aircraft at Perry-Foley Airport in nearby Perry. Archaeological excavations here revealed the formation of the hotel and outbuildings. "

Sponsored or placed by: THE TAYLOR COUNTY BOARD OF COMMISSIONERS AND THE FLORIDA DEPARTMENT OF STATE.