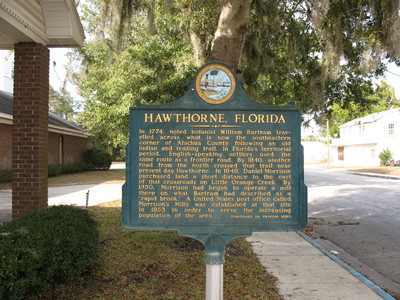 This marker is located on North Johnson St in Hawthorne, Fl.

" In 1774, noted botanist William Bartram travelled across what is now the southeastern corner of Alachua County following an old Indian and trading trail. In Florida's territorial period, English-speaking settlers used the same route as a frontier road. By 1840, another road form the north crossed that trail near present day Hawthorne. In 1848, Morrison had begun to operate a mill there on what Bartram had described as a "rapid brook." A United States post office called Morrison's Mills was established at that site in 1853 in order to serve the increasing population of the area. "

(Continued on reverse side)