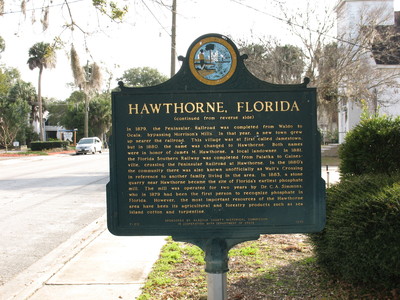 " In 1879, the Peninsular Railroad was completed from Waldo to Ocala, bypassing Morrison's Mills. In that year, a new town grew up nearer the railroad. This village was at first called Jamestown, but in 1880, the name was changed to Hawthorne. Both names were in honor of James M. Hawthorne, a local landowner. In 1881, the Florida Southern Railway was completed from Palatka to Gainesville, crossing the Peninsular Railroad at Hawthorne. In the 1880's the community there was also known unofficially as Wait's Crossing in reference to another family living in the area. In 1883, a stone quarry near Hawthorne became the site of Florida's earliest phosphate mill. The mill was operated for two years by Dr. C. A. Simmons, who in 1879 had been the first person to recognize phosphate in Florida. However, the most important resources of the Hawthorne area have been its agricultural and forestry products such as sea island cotton and turpentine. "