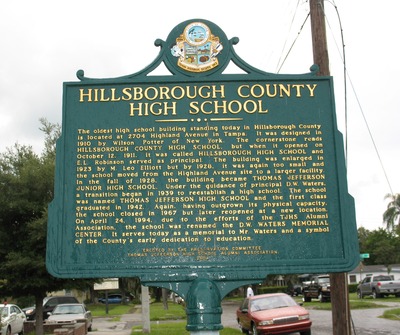 This marker is located on Highland Avenue in Tampa, Fl. This is the oldest school building standing today. It was designed by Wilson Potter of New York. It is now the D. W. Waters Memorial Center, a memorial to Dr. Waters the principal of the school.

The text on the marker reads as : " The oldest high school building standing today in Hillsborough County is located at 2704 Highland Avenue in Tampa. It was designed by Wilson Potter of New York. The cornerstone reads HILLSBOROUGH COUNTY HIGH SCHOOL, but when it opened on October 12, 1911, it was called Hillsborough High School and E.L. Robinson served as principal. The building was enlarged in 1923 by M. Leo Elliott but by 1928, it was again too small and the school moved from the Highland Avenue site to a larger facility. In the fall of 1928, the building became THOMAS JEFFERSON JUNIOR HIGH SCHOOL. Under the guidance of principal D.W. Waters, a transition began in 1939 to reestablish a high school. The school was named THOMAS JEFFERSON HIGH SCHOOL and the first class graduated in 1942. Again, having outgrown its physical capacity, the school closed in 1967 but later reopened at a new location. On April 24, 1994, due to the efforts of the TJHS Alumni Association, the school was renamed the D.W. WATERS MEMORIAL CENTER. It serves today as a memorial to Mr. Waters and a symbol of the County's early dedication to education.