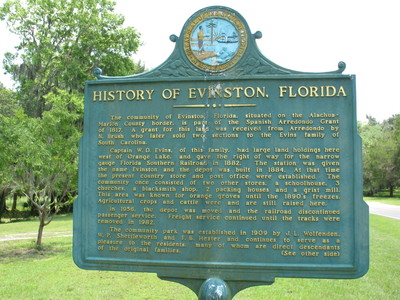 This marker is located on SR 225, at Evinston, Florida. It is on the border of Alachua- Marion County. Named after Captain W.D. Evins.

The community of Evinston, Florida, situated on the Alachua-Marion County border, is part of the Spanish Arredondo Grant of 1817. A grant for this land was received from Arrendondo by N. Brush who later sold two sections to the Evins family of South Carolina. Captain W. D. Evins, of this family, had large land holdings here west of Orange Lake, and gave the right of way for the narrow gauge Florida Southern Railroad in 1882. The station was given the name Evinston and the depot was built in 1884. At that time the present country store and post office were established. The community once consisted of two other stores, a schoolhouse, 3 churches, a blacksmith shop, 2 packing houses and a grist mill. This area was known for orange groves until the 1890's freezes. Agricultural crops and cattle were and are still raised here. In 1956, the depot was moved and the railroad discontinued passenger service. Freight service continued until the tracks were removed in 1982. The community park was established in 1909 by J.L. Wolfenden, W.P. Shettleworth and F.B. Hester and continues to serve as a pleasure to the residents, many of whom are direct descendants of the original families.

Continued on the other side as :

" The Evinston community store, originally a warehouse, was built of heart pine in 1884 by W.P. Shettleworth. it was bought by Joseph Wolfenden, who first operated it as a store. The post office, established in 1882 was later moved into the building. The present store sits 100 feet south of its original location. It was moved in 1956 because of road paving. Located across from the railroad depot, it was a meeting place then as now. Numerous owners managed the store through the turn of the century. In 1909 H.D. Wood and Robert Evins bought the store. The later partnership of Wood and Swink, in 1934, is still indicated on the store front. Fred Wood became postmaster of Evinston in 1934 and served for 44 years, longer than any other postmaster in Florida. Still containing original post office boxes and equipment, this is one of the few remaining country store-post offices. In 1977, the country store was used as a set for the movie adaptation of Marjorie Rawlings' short story Gal Young'un. "