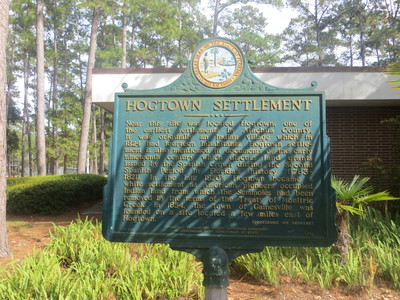 Hogtown was a 19th-century settlement in and around what is now Westside Park in Gainesville, Florida. Originally a village of Seminoles who raised hogs, the habitation was dubbed "Hogtown" This marker stands in the public park in Gainesville.

" Near this site was located Hogtown, one of the earliest settlements in Alachua County. It was originally an Indian village which in 1824 had fourteen inhabitants. Hogtown settlement is also mentioned in documents of the early nineteenth century which discuss land grants issued by the Spanish crown during the Second Spanish Period in Florida's history (1783-1821). In the late 1820's Hogtown became a white settlement as American pioneers occupied Indian land from which the Seminoles had been removed by the terms of the Treaty of Moultrie Creek. In 1854, the town of Gainesville was founded on a site located a few miles east of Hogtown.

Continued on other side as :

" Fort Hogtown During the Second Seminole War (1835-42), a settler's fort was built at the Hogtown settlement near this site. Shortly before the onset of that war, men from the Hogtown settlement and from Spring Grove, a community located about four miles to the west, organized a volunteer company of mounted riflemen, the Spring Grove Guards. Spring Grove was at that time the seat of justice in Alachua county (1832-1839). For several months, members of the Guards periodically paraded and patrolled the countryside to protect the inhabitants against Indians. The fort at Hogtown was one of more than a dozen Second Seminole War forts located in or near present-day Alachua County. "