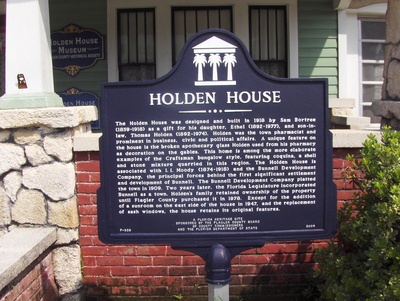 This marker is located outside the Holden House in Bunnell in Flagler County, Florida.

" The Holden House was designed and built in 1918 by Sam Bortree (1859-1918) as a gift for his daughter, Ethel (1892-1977), and son-in-law, Thomas Holden (1892-1974). Holden was the town pharmacist and prominent in business, civic and political affairs. A unique feature on the house is the broken apothecary glass Holden used from his pharmacy as decoration on the gables. This home is among the more elaborate examples of the Craftsman bungalow style, featuring coquina, a shell and stone mixture quarried in this region. The Holden House is associated with I.I. Moody (1874-1918) and the Bunnell Development Company, the principal forces behind the first significant settlement and development of Bunnell. The Bunnell Development Company platted the town in 1909. Two years later, the Florida Legislature incorporated Bunnell as a town. Holden’s family retained ownership of the property until Flagler County purchased it in 1978. Except for the addition of a sunroom on the east side of the house in 1947, and the replacement of sash windows, the house retains its original features."

Sponsors: FLAGLER COUNTY BOARD OF COUNTY COMMISSIONERS AND THE FLORIDA DEPARTMENT OF STATE