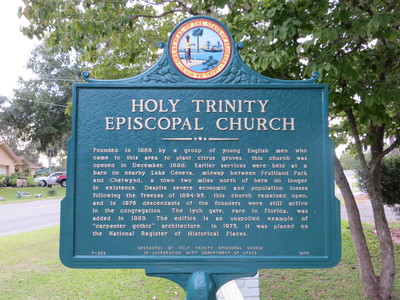 The marker is located on Spring Lake Road north of Fruitland Park.

" Founded in 1886 by a group of young English men who came to this area to plant citrus groves, this church was opened in December, 1888. Earlier services were held at a barn on nearby Lake Geneva, midway between Fruitland Park and Chetwynd, a town two miles north of here no longer in existence. Despite severe economic and population losses following the freezes of 1894-95, this church remained open, and in 1976 descendants of the founders were still active in the congregation. The lych gate, rare in Florida, was added in 1889. The edifice is an unspoiled example of "carpenter gothic" architecture. In 1975, it was placed on the National Register of Historic Places."

Sponsors: sponsored by holy trinity episcopal church in cooperation with department of state