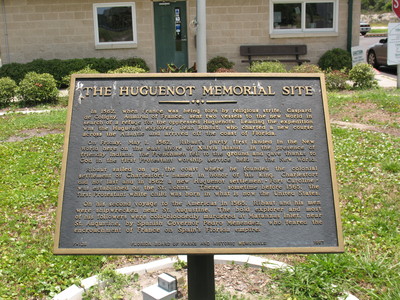 The Huguenot Memorial Site is denoted by a marker located at the entrance to Huguenot Memorial Park in Jacksonville, Florida, USA. The site is dedicated to the Huguenots who left France to seek religious freedom and to escape religious persecution. They were Protestants or Huguenots, who had suffered from their Catholic enemies in France and were seeking refuge in the New World.

" In 1562, when France was being torn by religious strife, Gaspard de Coligny, Admiral of France, sent two vessels to the New World in search of a refuge for the oppressed Huguenots. Leading the expedition was the Huguenot explorer, Jean Ribaut, who charted a new course across the Atlantic and arrived off the coast of Florida.

On Friday, May 1, 1562, Ribaut's party first landed in the New World here on the east shore of Xalvis Island. In the presence of friendly Indians, the Frenchmen fell to the ground and gave thanks to God in the first Protestant worship service held in the New World.

Ribaut sailed on up the coast where he founded the colonial settlement of Charlesfort - named in honor of his king. Charlesfort did not last and in 1562 a Huguenot settlement - Fort Caroline - was established on the St. Johns. There, sometime before 1565, the first Protestant white child was born in what is now the United States.

On his second voyage to the Americas in 1565, Ruinate and his men were shipwrecked near St. Augustine. The bold explorer and most of his followers were cold-bloodedly murdered at Matanzas Inlet, near St. Augustine, by Spanish Governor Pedro Menendez, who feared the encroachment of France on Spain's Florida empire."