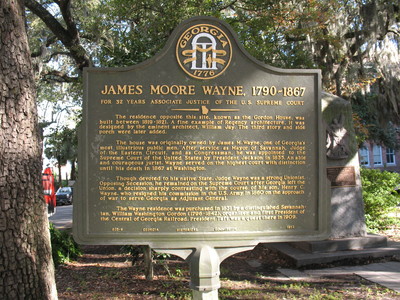 " The residence opposite this site, known as the Gordon House, was built between 1819-1821. A fine example of Regency architecture, it was designed by the eminent architect, William Jay. The third story and side porch were later added. The house was originally owned by James M. Wayne, one of Georgia's most illustrious public men. After service as Mayor of Savannah, Judge of the Eastern Circuit and as Congressman, he was appointed to the Supreme Court of the United States by President Jackson in 1835. An able and courageous jurist. Wayne served on the highest court with distinction until his death in 1867 at Washington. Though devoted to his native State, Judge Wayne was a strong Unionist. Opposing Secession, he remained on the Supreme Court after Georgia left the Union, a decision sharply contrasting with the course of his son, Henry C. Wayne, who resigned his commission in the U.S. Army in 1860 on the approach of war to serve Georgia as Adjutant General. The Wayne residence was purchased in 1831 by a distinguished Savannahian, William Washington Gordon (1796-1842), organizer and first President of the Central of Georgia Railroad. President Taft was a guest there in 1909."