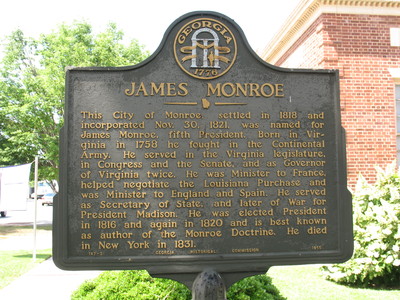 This marker is located one block south of the courthouse in Munroe.

It reads as : " This City of Monroe, settled in 1818 and incorporated Nov. 30, 1821, was named for James Monroe, fifth President. Born in Virginia in 158 he fought in the Continental Army. He served in the Virginia legislature, in Congress and the Senate, and as Governor of Virginia twice. He was Minister to France, helped negotiate the Louisiana Purchase and was Minister to England and Spain. He served as Secretary of State, and later of War for President Madison. He was elected President in 1816 and again in 1820 and is best known as author of the Monroe Doctrine. He died in New York in 1831."