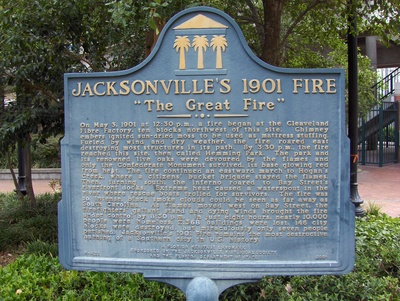 This marker about the Great Fire of 1901 is located in Hemming Plaza, now James Weldon Johnson Park in downtown Jacksonville, Florida, USA. The Great Fire of 1901 was one of the worst disasters in Florida history and the largest urban fire in the Southeast. It was similar in scale and destruction to the 1871 Great Chicago Fire. It swept over 146 blocks and destroyed over 2,368 buildings.

" On May 3, 1901 at 12:30 p.m., a fire began at the Cleaveland Fibre Factory, ten blocks northwest of this site. Chimney embers ignited sun-dried moss to be used as mattress stuffing. Fueled by wind and dry weather, the fire roared east destroying most structures in its path. By 3:30 p.m., the fire reached this site, then called Hemming Park. The park and its renowned live oaks were devoured by the flames and only the Confederate Monument survived, its base glowing red from heat. The fire continued an eastward march to Hogan's Creek, where a citizens'? bucket brigade stayed the flames. Then, turning south, the inferno roared to Bay Street's riverfront docks. Extreme heat caused a waterspout in the river where rescue boats trolled for survivors. The fire was so intense, black smoke clouds could be seen as far away as South Carolina. As flames moved west on Bay Street, the firefighters? gallant stand and dying winds brought the fire under control by 8:30 p.m. In just eight hours, nearly 10,000 people were homeless, 2,368 buildings were lost, 146 city blocks were destroyed, but miraculously only seven people perished. Jacksonville's 1901 Fire remains the most destructive burning of a Southern city in U.S. history."

Placed by the Jacksonville Historical Society and the Florida Department of State.