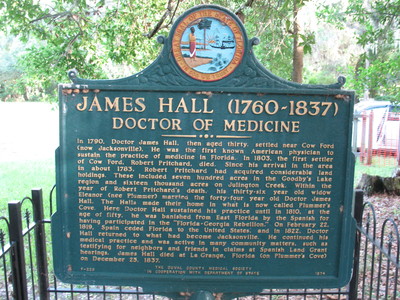 This marker is located in Lomax Street , Jacksonville, Fl.

" In 1790, Dr. James Hall, then aged thirty, settled near Cow Ford (now Jacksonville). He was the first known American physician to sustain the practice of medicine in Florida. In 1803, the first settler of Cow Ford, Robert Pritchard, died. Since his arrival in 1783, Pritchard had acquired considerable land holdings. These included seven hundred acres in the Goodby's Lake region and sixteen thousand acres on Julington Creek. Within the year of Robert Pritchard's, his thirty-six year old widow, Eleanor (nee Plummer) married the forty-four year old Doctor James Hall. The Halls made their home in what is now called Plummer's Cove. Here Dr. Hall sustained his practice until 1810, at the age of fifty, he was banished from East Florida by the Spanish for having participated in the "Florida-Georgia Rebellion." On February 22, 1819, Spain ceded Florida to the United States, and in 1822 Doctor Hall returned to what had become Jacksonville. He continued his medical practice and was active in many community matters, such as testifying at Spanish Land Grant hearings. James Hall died at LaGrange, Florida (on Plummer's Cove) on December 25, 1837."