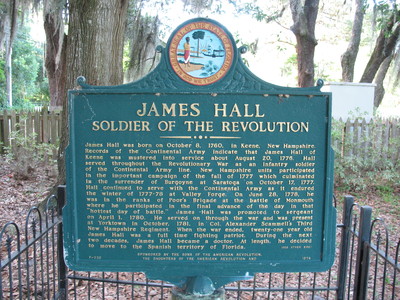 This marker tells of James Hall as a soldier in the Revolutionary War. When the war ended he was a full-time fighting patriot. During the next two decades he became a doctor.

" James Hall was born on October 8, 1760, in Keene, New Hampshire. Records of the Continental Army indicate that James Hall of Keene was mustered into service about August 20, 1776. Hall served throughout the Revolutionary War as an infantry soldier of the Continental Army line. New Hampshire units participated in the important campaign of the fall of 1777 which culminated in the surrender of Burgoyne at Saratoga on October 17, 1777. Hall continued to serve with the Continental Army as it endured the winter of 1777-78 at Valley Forge. On June 28, 1778, he was in the ranks of Poor´s Brigade at the battle of Monmouth where he participated in the final advance of the day in that "hottest day of battle". James Hall was promoted to sergeant on April 1, 1780. He served on through the war and was present at Yorktown in October, 1781, in Col. Alexander Scammell´s Third New Hampshire Regiment. When the war ended, twenty-one year old James Hall was a full-time fighting patriot. During the next two decades, James Hall became a doctor. At length, he decided to move to the Spanish territory of Florida. "