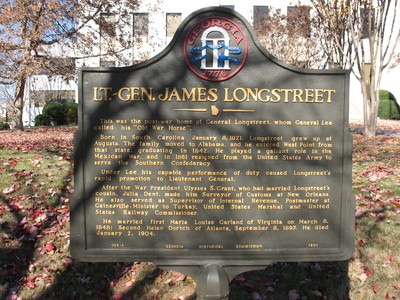 This marker is on the Courthouse Square in Gainesville. It was dedicated on July 4, 1954. He was one of the foremost Confederate generals of the American Civil War.

The text on the marker reads as : " This was the post-war home of General Longstreet, whom General Lee called his ´Old War Horse´.

Born in South Carolina January 8, 1821, Longstreet grew up at Augusta. The family moved to Alabama, and he entered West Point from that state, graduating in 1842. He played a gallant role in the Mexican War, and in 1861 resigned from the United States Army to serve the Southern Confederacy.

After the War President Ulysses S. Grant, who had married Longstreet´s cousin, Julia Dent, made him Surveyor of Customs at New Orleans. He also served as Supervisor of Internal Revenue, Postmaster at Gainesville, Minister to Turkey, United States Marshall and United States Railway Commissioner.