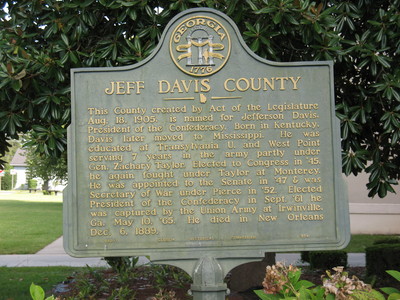 " This County created by Act of the Legislature Aug. 18, 1905, is named for Jefferson Davis, President of the Confederacy. Born in Kentucky, Davis later moved to Mississippi. He was educated at Transylvania U. and West Point serving 7 years in the army partly under Gen. Zachary Taylor. Elected to Congress in ‘45, he again fought under Taylor at Monterey. He was appointed to the Senate in ‘47 & was Secretary of War under Pierce in ‘52. Elected President of the Confederacy in Sept. ‘61 he was captured by the Union Army at Irwinville, Ga. May 10, ‘65. He died in New Orleans Dec. 6, 1889."